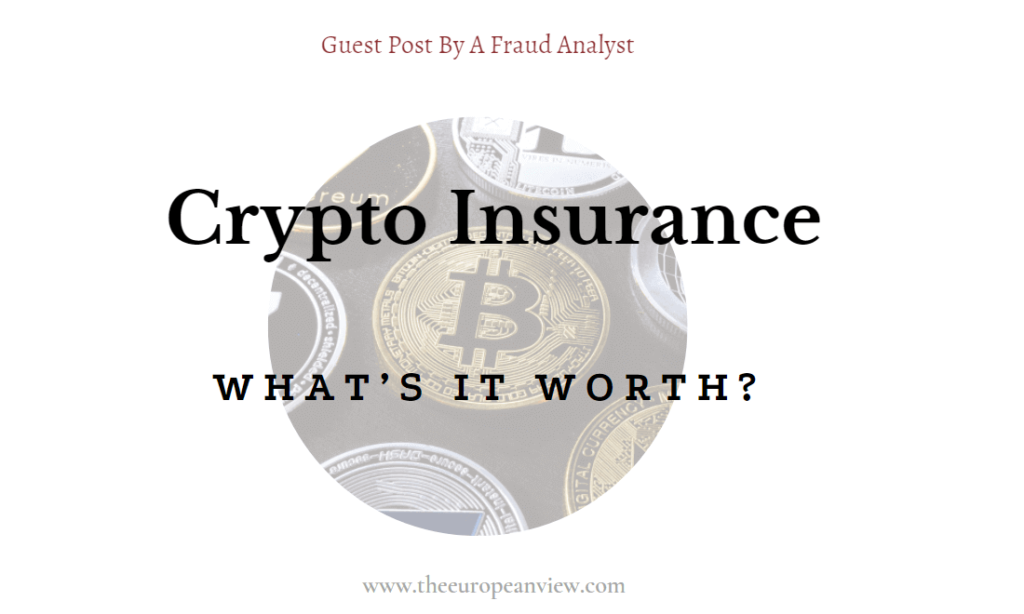 As an investor, you’re usually not insured. But in the crypto sector, of all places, this shall be different. Now, crypto insurances are spreading in this sector, which automatically makes one wonder: how can this be? Or to put it another way: what is it worth, such a crypto insurance?

Me, I’m a child of the classic investment market; but because more shenanigans are going on in the bullshit markets (“fundamental investments”, how I call them), I have become specialized in this field.

So let’s first talk briefly about cryptos, namely Bitcoin, the bull of the flock, before we talk about insurances.

BTC has recently halved in value from over 60,000 dollars to around 30,000. The blame lies with power grid safety, not Elon Musk: the Chinese have declared mining on their soil illegal, which has pulled the rug out from under the currency: electricity is cheap in China, and more than half of the hash rate power that keeps the currency vivid is produced there.

Now many miners have had to move at short notice. They have mainly moved to Texas and Kazakhstan, both of which are considered to be crypto-friendly states. But it takes time for the miners to reinstall their equipment. And that’s how long the hash rate, through which all financial transactions are written to the blockchain, is on the rocks.

The miners are Bitcoin’s systemic heart – their computing power pumps the currency’s bloodstream.

If you want to learn more about cryptos, you can check out LinkedIn: they offer a recommendable nine-hour online training on the subject

It’s not currencies but its wallet (contents) that are insured in the crypto sector. This means that if your wallet is “stolen”, inaccessible or hacked, you will be compensated for your losses as long as it doesn’t exceed your insurance coverage.

To cover the loss of Bitcoins & Co. due to defective storage media is difficult as most insurance companies can hardly assess the risk. The same applies to hacker attacks against crypto wallets. That is why only a few insurers offer policies.

In 2020, crypto wallet operator Civic Technology (CVC) announced that its wallets will be insured for one million dollars by insurance provider Coincover.

CVC CEO Vinnie Lingham said that this would allow customers to avoid having to constantly move their money back and forth between their cold wallet (offline at home, secure) and hot wallet (online on the server, insecure):

“Until now, people had to keep their coins in the cold storage, but now they don’t have to worry about it as their holdings are insured up to #1,000,000 just like a bank account with the FDIC.” (Source)

No insurance against hacking

FDIC is short for Federal Deposit Insurance Corporation. This means that Civic’s widely published insurance is bankruptcy protection. If you get hacked, your money is still gone – what goes around comes around only if your wallet provider goes broke.

CVC’s Coin insurance cover also goes one step further and offers wallet holders insurance in the event of lost private keys. This, theoretically, is a good thing, because when with cryptocurrencies, the motto is “not your keys not your coins” – without private keys, you have no access to your money.

In reality, however, claiming both insurance benefits requires that you provide full information about yourself: without “Know Your Customer”, there’s no coverage. Secondly, you have to deposit a few copies of your private keys with the insurer and wallet provider.

A smokescreen that promises a lot of stress for little protection

And that makes Coincover’s CVC insurance cover worth less than worthless to most investors. It’s a smokescreen that promises a lot of stress for little protection. If you simply continue to take your big greenbacks home offline from CVC’s cloud server every time, the company can go bust and you will at most lost your loose change in the coin box.

And if you just look after your private keys yourself, you don’t need crypto insurance to keep spare keys against conditions. Just share them with someone you trust. Your mother, for example.

The general cryptocurrency cover is worth nothing. Anonymity is given up, but even more so is the control over one’s own keys. Besides, it’s nonsense to store money on a server if you don’t need it.

So one wonders why it’s offered anyway. Well, because more and more retail investors are entering the market who have no idea about cryptocurrencies. And such customers fall for every sign everywhere else that says “guarantee” and “for free”.

We will see what this means in the individual insurance area, which will be dealt with in the next article.

The Asian View is a European fraud fighter based in Eastern Asia with a focus on consumer fraud and fundamental investment scams. He lives in Eastern Asia (we studied in the same city in Europe though) and publishes his research papers on Academia.edu. To go along with this blog’s name, he chose to publish under the pseudonym The Asian View. For him it is a bit of fun, for the TEV Blog a great honor, making it a win-win for both of us.

More of The Asian View’s articles on the TEV Blog can be found here.