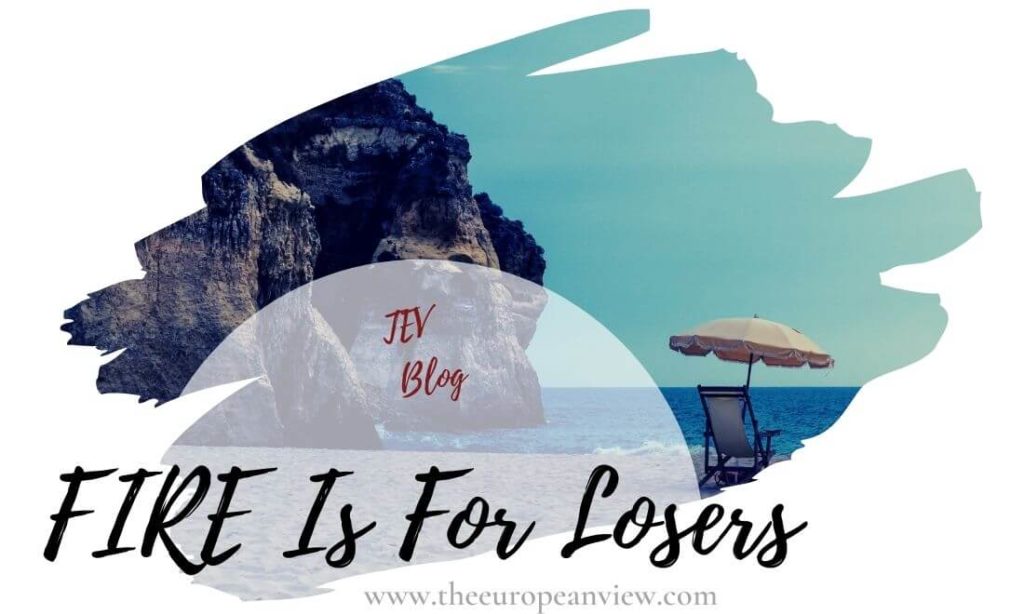 The FIRE movement is a sensitive issue. FIRE represents “Financial Independence/Retiring Early”. As big as the supporters of the movement are, so are the critics or those who make fun of it. I, too, am fundamentally ambivalent about this movement.

In general, it is difficult to criticize FIRE. In the end, the supporters want to achieve financial independence by reducing their expenses and increasing their income. Can I complain about that? Hardly, because in the end, I do the same.

Having a high saving rate is a great thing. When the car breaks down or we need a new washing machine, we don’t have to worry about our bank accounts. So the path to Financial Independence already leads to the very comfortable stopover of Financial Worry Reduction.

Likewise, no one would say “no” to a life without financial limits. Imagine you could say, “I got 99 problems but money ain’t one”. Financial independence comes very close to this scenario, but of course, it also depends on your circumstances and lifestyle.

And here is already a crucial weakness of the FIRE movement as I struggle somewhat with frugalism.

I struggle a bit with frugalism

I have already written a rather critical article about frugalism. There, however, I do not criticize the sustainable lifestyle itself, but its presentation by many frugalistas.

Our society is not designed to become financially free quickly. Accordingly, it takes a lot of capital to earn a return that is sufficient to live on. Only a few have this capital from the start. Most have to accumulate it laboriously. And of course, it helps if the gap between income and expenses is as wide as possible.

This is where frugalism comes in. Frugalism is a term that stands for a particularly frugal way of life. Frugalistas try to reduce the satisfaction of material needs as much as possible which allows them to invest more money and focus more on non-material things.

The easiest way to do this is probably to spend less than you earn each month and invest the rest. However, this is not frugalism, but simply a rational approach to life – so you don’t need a catchy name for it.

For me as a hedonistic person, it becomes critical when people reduce the fulfillment of their needs drastically. In such cases, frugalism quickly becomes stinginess towards oneself. Needs are communications from our body and soul. We all need the dopamine rush in our bodies sometimes. For one person it’s a new car, for another 300 grams of Wagyu, or a trip to a luxury hotel.

I hate the early retirement part

I have particular difficulties with the early retirement part. In fact, many FIRE people only want to keep their jobs until they achieve financial independence and then quit.

And this state, which in doubt takes 10 or 20 years of life is from my perspective a very sad state.

Just take a look at particularly successful business people. Each of them could simply stop working. But hardly any of the successful people do that because very few people want to leave a successful company.

The only people who really want to leave are those who are doing badly, who are not earning well. But they rarely have sufficient fortune to achieve FIRE in the short or medium term. And so they hang around for 20, 30, or 40 years in jobs with a mindset of escaping those jobs. So overall, it feels like all the mates who endorse FIRE are themselves totally tied up in their jobs.

In short: Those who strive for FIRE live in an environment from which they would like to get out. Not today, but someday. But only when there is sufficient comfort and security. One can do that. But it is a huge sacrifice.

FIRE is the wrong narrative – and ultimately for losers

For me, FIRE is the wrong narrative. I act hedonistically first and foremost, and I want to feel happy now, today, tomorrow, and beyond. And I consider myself a one-man business and my human capital as my key asset.

Spending my life in a job that I do only to retire in 30 years would not be acceptable to me. Spending a lifetime hyping great entrepreneurs on Twitter, but not considering myself and my advancement as my own small growing business? Hell no!

So yeah, in the end, I would kind of say that FIRE is a loser thing. I would never want to retire my own small business (myself, as a person living under capitalism).

If my business increases in value because I read a smart book under a belly, that’s not early retirement, that’s accumulation of human capital, accumulation of knowledge that I can use when I meet other smart people.

So it’s all about the narrative, the attitude towards oneself, and one’s role in the shark tank.