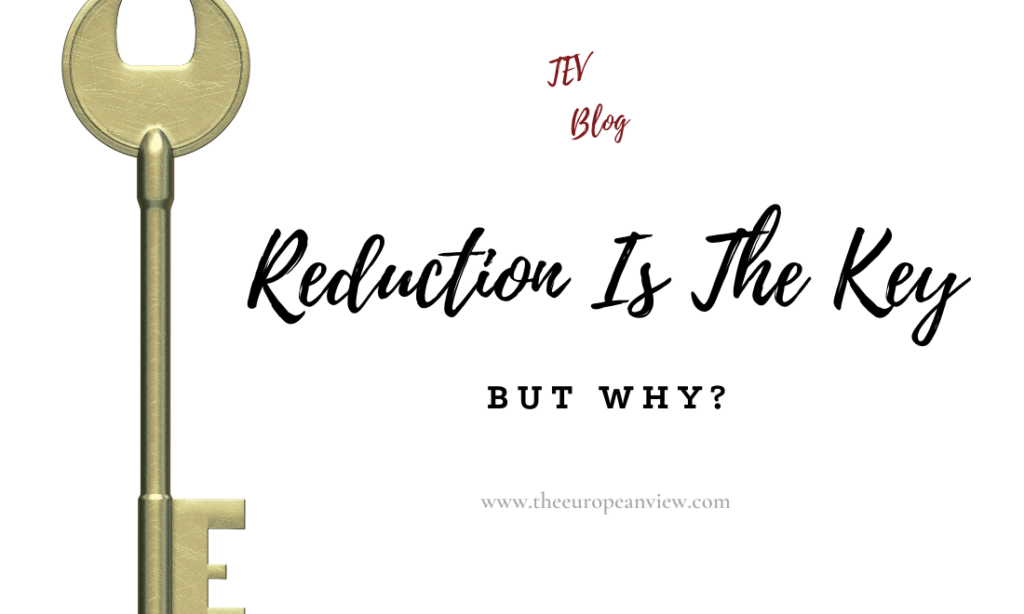 The internet is full of advice on minimalism, frugalism, etc. Undeniably, the reduction of abundance that goes along with these concepts brings a lot of benefits. But I am convinced that the value of these concepts and the benefits of minimalism etc., for the individual are much greater if we remember what reduction is and what it does.  This article aims to address that. It is an ode to reduction.

We hoard too much of everything

People own a lot of things. It is said that a Western European owns about 10,000 things. A US household is said to own as many as 300,000 items. That is a lot, although I am not sure if these numbers are 100 percent waterproof!

If I were to spontaneously list everything I need to live, I’m not sure I could name more than 100 items ad hoc. If I were to take inventory, I’m sure I’d come up with a lot of nonsense too – and that’s even though I have an aversion to stuff and see potential in an empty cupboard rather than a cluttered one.

I also notice that I have accumulated a lot of things over time. Some I need, others are only useful or immaterially valuable, but I am often too lazy to clear things out.

Reduction is good at its core. It means removing substance from something and thus creating lightness. What is light is mobile and independent.

Reduction is also aesthetic. We all enjoy the clean lines and structures of a tidy room. The appearance and smell of nature without pollution, i.e., without the accumulation of unnatural objects, is a dream.

Minimalism or frugalism carry these considerations. Here, reduction is meant to take the ballast as well as the unnecessary out of life and to release energy.

The FIRE movement also offers an outlet for the released energy. The capital capacities created by frugalism are to be invested so that early retirement is possible.

But why are reduction and minimalism so beneficial?

The above is more or less common sense. But there is something inherent in the concept of reduction or minimalism that closes the loop to something else, something much more significant.

I have already written about how antifragility is something archaic, deeply rooted in the understanding of evolution. Antifragility is created by time, which strips everything fragile from our environment and brings the antifragile to light.

“All being is problem-solving” and an adaptation to external circumstances and disturbances. Things that are fragile collapse in the face of these challenges and perish. We often don’t even take notice of it.

What is antifragile, i.e., benefits from disturbances and challenges, remains.

So if I want to create antifragility, I must inevitably use reduction as a tool from my toolbox at some point.

The minimalism dilemma – I am not a Diogenes!

Minimalism and frugalism are crude hammers. They aim at a general reduction. There should be less of everything. It’s a sweeping attack that stops at nothing.

But I’m not sure that this is the right approach. Reducing for the sake of reducing leads to asceticism in the end.

However, most people are hedonists and not Diogenes in a wooden barrel. They want pleasure and often luxury.

Besides, minimalism finds poor justification for the accumulation of wealth and prosperity. What is the money needed for if the lifestyle is only about living as simple/spartan a life as possible? Mostly, it is about maintaining the quality of life, only without having to work. But would frugalistas reject wealth? Antifragilists with a penchant for hedonism do not face this problem, and I will explain later why.

Additionally, if you cut back on the wrong things, you run the risk of causing more harm than good for yourself. Minimalism can make us fragile based on false calculations. I call this the “minimalism dilemma”. But don’t worry, the dilemma is solvable, as we will see in a moment.

How I solve the minimalism dilemma

The minimalism dilemma is relatively easy to solve by using the following heuristic (rule of thumb). All we need is the right point of contact. And voila, once again, we are talking about antifragility.

Reduction and thus minimalism should be used for the benefit of antifragility. Accordingly, I try to reduce in my life what makes me fragile.

Fragile is everything that makes me sleep badly, triggers me, or harms me in some other way. So it’s about all the disturbances that, if they persisted long enough, would break me.

Anglers who want to be geologists are a good example of such a disturbance. Dealing with them does me no good. That is why I avoid them.

Conversely, I enjoy conversations or discussions with the right people, even if I don’t share their opinions. Dialectics is antifragile. Wanting to be right (the angler) is fragile.

In essence, I am simply concerned with minimizing with a proper scale and on the right things. Why should I reduce the money in my bank account or lower my education expenses (only because it often costs money when I want to reach a certain level, such as a foreign master’s degree)?  Why should I reduce culture and restaurant visits (only because opera, theatre, and fine food are pretty expensive)?

Should I reduce wealth and money?

Any frugal person would probably say that his or her minimalism ends at his or her deposit. And indeed, a reduction does not help here to increase antifragility.

The problem here is not the possession but either the fear of losing it or the dependency on it. If I get rid of the fear, then I don’t have to worry about my wealth. If I reduce the dependence, the level of wealth does not matter either.

Worry and dependency are fragile. Wealth is essentially neutral. At best, it creates freedom through its inherent value and thus antifragility.

Seneca once said: “He who has himself has lost nothing!”