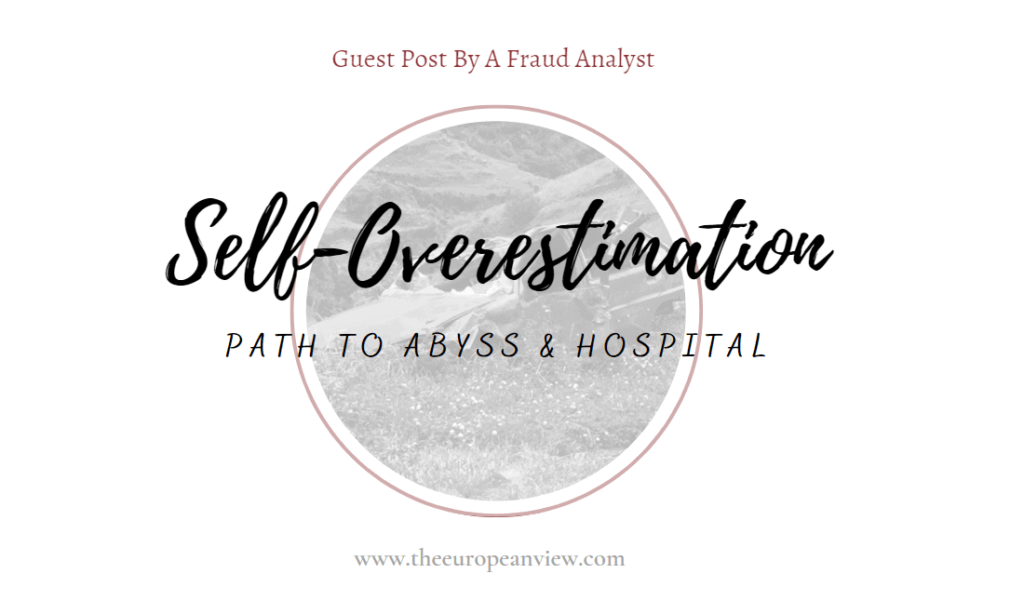 Those who constantly overestimate their cooking skills are more likely to be invited than to have guests themselves. Fair enough. But misjudging one’s abilities in other areas of life might be less harmless. There, overestimation can quickly lead to the financial abyss or hospital.

More skillful and less risky than the average is the typical financial investor when asked. There’s no chance to get proof of whether this is true or false. How shall we do this? When s/he loses control again, s/he stays silent about it, while s/he talks lots of nonsense about how capable s/he is when s/he wins.

Losses are swallowed down. Winning is exaggerated. That’s the typical investor, leading to Twitter “feeds” that are full of bragging and showing off. And so you quickly get the impression that everyone but you is getting the monster returns.

However, there is one thing where the conditions are precisely the same as in the investment world, but where it’s quite easy to distinguish between exaggeration and truth: drivers or motorists. There, everyone also thinks they are the best and the greatest, while their damage from accidents is statistically recorded.

Self-assessment of drivers regarding their driving skills

Let us, therefore, look at a study about this. In 1981, psychologist Ole Svenson published the results of his survey concerning the self-assessment of drivers regarding their driving skills. It was a comparative study where he compared Americans with Swedes.

The research question was: When I compare myself to the other (eighty) people sitting in this room with me, where do I rank in terms of my driving skills and ability to drive safely?

The Swedes were no less unrealistic but at least a little less haughty about themselves: 7.2 percent believed their ability was below average. In comparison, just under 80 percent saw themselves as belonging to the top third. 46.1 percent belong to the top 20 percent and 19.5 percent to the top 10.

In terms of safe driving, 22.9 percent of Americans said they’re below average, while 65.7 percent are in the top third. In addition, 22.8 percent of the people surveyed are top 20, and only 5.7 percent perceive themselves to be top 10.

The Swedes, on the other hand, have 31 percent who consider themselves below average, while “only” 51 percent rank in the top third. The top 10 safety performers are a meager 2.2 percent, while 15.5 percent rated themselves top 20.

What does this study tell us?

We can say that those who probably totally overestimate their driver skills can at least still think logically enough not to consider themselves among the above-average security performers. 22.5 percent see themselves as top 10 in terms of ability, 22.9 percent as below average in terms of safety – that fits.

In relation to both folks, however, the conclusion remains that people consider themselves better than Average Joe. And no catastrophe can change this: Preston and Harris had asked 50 drivers on the street and 50 who were lying in hospital whether they considered themselves capable drivers. The results of both groups were almost identical, although 34 of the 50 hospitalized drivers were responsible for their accident regarding police reports.

We can only assume that this also applies to investors and traders who constantly blow money and underperforming the market. They will talk about bad luck, manipulated markets, and coincidences.

They forget that they pressed the “buy” button based on their investment strategy. Again, the similarities to motorists are apparent. The driver who presses the gas pedal believes he has the risk under control because of his skills. Traders, on the other hand, leverage or buy on margin. It is the same risky play, but they also think they control risk based on their experience and skills.

Crash prophets who predict the demise of everything for decades are equally trapped in overestimating their capabilities. They either do not understand the facts or draw the wrong conclusions from them. Both have to do with overestimation. We can go even further. Overestimation of their own abilities is probably an accusation that most self-proclaimed experts in the financial Twitter bubble have to face.

The advent of the financial television channel CNBC presented plenty of benefits to the financial community but it also allowed a collection of extrovert practitioners long on theories to voice them in a few minutes of television time. One often sees respectable people making ludicrous (but smart-sounding) statements about properties of the stock market. (Nassim Nicholas Taleb, Fooled by Randomness)

What do we learn from that?

As long as we constantly overestimate ourselves or value the person next to us less than ourselves, we will never be better than average. So instead, we will lie in a hospital like the 68 percent after self-inflicted accidents and tell everyone how great we are and that we had bad luck or something unexpected came up or – the classic one – we became victims of evil forces or intrigues. So it’s everyone’s fault but our own.

And this is precisely the thinking that makes us average and averagely susceptible to fraud – it doesn’t matter if we’re cocky Americans or snooty Swedes.

The Asian View is a European fraud fighter based in Eastern Asia focusing on consumer fraud and fundamental investment scams.