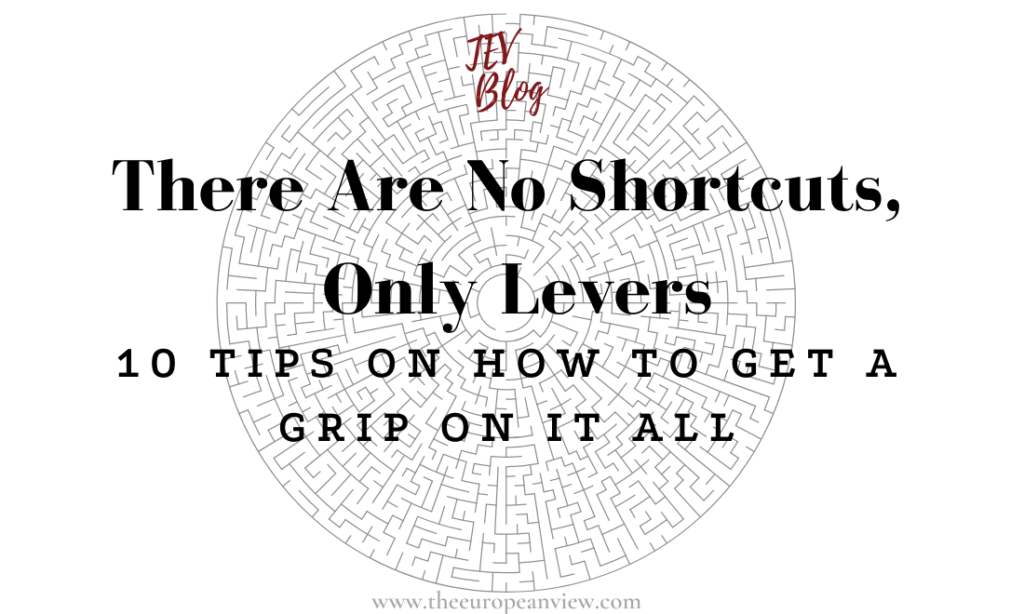 Life is full of promises, and everywhere the supposedly low-hanging fruit lures greedy people out of their caves. And so, many people fall prey to the longing for shortcuts in life. Fools they are and little do they probably know about the simplest and probably most universal heuristic (rule of thumb).

Contents show
1 Health, career, finances – 10 tips on how to get a grip on it all
2 Don’t read all the “10 tips”-articles. I’m serious, do yourself this favor
3 The simplest and probably most universal heuristic
3.1 There are no shortcuts, so I don’t take them
3.2 Shortcuts are unnatural
3.3 Truth is what has been established for centuries
4 There are only levers
4.1 Using the experience of others, i.e., relying on simple heuristics
4.2 Risk/reward ratio: lever only goes in both directions
5 Time is no lever, but it is still great

Health, career, finances – 10 tips on how to get a grip on it all

We live in a world where an angler declares himself a geologist because he digs for earthworms in wet soil. The internet is full of these types of anglers.

And they all tell us where to get the fattest worms, how best to eat and how best to talk to your boss. All this is packaged in catchy “10 tips” headlines. Not all internet users know that this kind of headline serves simple commercial interests. Because after all, these headlines generate the most clicks.

As is so often the case with blogs, websites, and Twitter, it’s less about content and more about clicks. How much the blog creator cares about commercial interests can be easily seen from the content/ad banner ratio and from the number of articles that begin with “xy tips on how to …”.

But don’t get me wrong, commercial interests are fine. Commercial elements in a blog allow the blog owner to quit the job and devote 100 percent to the content. That’s not necessarily a bad trade!

In addition, some articles live up to the responsibility that comes with such a headline. Sometimes, they provide real added value.  I read them too. But now, end of the disclaimer. In most cases, such articles may be suitable as an overview, but they are not a shortcut in the sense of a list you can tick off.

Don’t read all the “10 tips”-articles. I’m serious, do yourself this favor

I continue to try to hold back on recommendations on the TEV Blog. I often change older articles, delete “Do this,” and change it to “I do this because”.

Before I spout off recommendations and advice to the world, I should ask myself whether I would advise my grandmother to do the same and whether I would be willing to bear the negative consequences instead of her. That doesn’t always work, but I try to stick to it. And like everything else in life, it’s the same here: practice creates (almost) perfection.

Nevertheless, I advise against reading these articles with all the catchy “10 tips” headlines. You won’t achieve anything with them. Action is needed. Self-action. That’s what it’s all about.

Spending time on the internet reading about getting a grip on life is also just a kind of escape and procrastination. A successful and healthy life has to be lived successfully and healthily! That is guidance enough. There is no guidance for anything else.

The simplest and probably most universal heuristic

What we are looking for with these articles is a shortcut in life. I want to get healthy. 10 tips on how to do that? Perfect, I implement these tips, and then I’m healthy.

No, unfortunately, it’s not that simple, at least in practice. The theory is different. Of course, a healthy diet and exercise are essential components for a healthy life. Often that’s all it takes – and that is quite easy to understand.

But many people don’t put the consequences into practice and instead buy advice books and tips lists. They are lost in theory.

I suspect that the problems with overweight and obesity increase proportionally with the number of guidebooks and articles. Plus, I am not sure whether being overweight is the cause of all these articles or vice versa. Instead of lifting the weight themselves, people read how to build up strength.

However, there is an almost universal heuristic that has so far not been falsified as a universal decision-making aid: “there are no shortcuts.”

There are no shortcuts, so I don’t take them

Heuristics are valid until they are falsified as a whole (i.e., not for individual cases). It speaks volumes for the substance of a heuristic if it exists in many variations. This is also the case with “There are no shortcuts”. An alternative formulation is “There is no free lunch”. In Germany, we say: “Nichts ist umsonst” (Nothing is for free).

I rely on these heuristics. I’ve been doing it for as long as I can remember. I often have to think of this when I meet people who tell me about the failure of a new diet, etc., or about the fact that the bargain house turned into a nightmare.

But enough of that. What is more interesting are the considerations related to this heuristic, which extend into the evolution theory. Thus, I am leaving the realm of life advice and turning to heuristics, especially the heuristic “there are no shortcuts” in a somewhat abstract way.

The fact that shortcuts rarely work is due to the way Mother Nature works.

In nature, everything runs according to a program: trial, error, failure, second/third or even millionth attempt, success. Without the attempt, and often without the failure, it doesn’t work. We can’t simply bypass all the errors and mistakes when we strive for something new and unachieved. Imagine if we had to develop a healthier, fitter person than ourselves on the drawing board and only had one chance to do it. We would fail miserably.

Those who seek shortcuts want to leave the known and established paths. For this adventure, one has to bring a lot of courage, and most of the time, we will fail.

This does not mean that failure is bad. Not at all! It’s just that we have the right expectations and a dose of skepticism towards anything that looks like a shortcut or a free lunch.

Truth is what has been established for centuries

What has become established and works results from a concept that is sometimes thousands or millions of years old.

Is it likely that a blogger has now invented the philosopher’s stone in health or financial matters? And why should this groundbreaking insight now be superior to processes that have worked for all time and have not been falsified?

The fact that a concept or method has not yet been falsified in natural sciences gives it a very high weight. A shortcut to losing weight (i.e., abstaining from either exercise or healthy eating) hardly stands a chance against this.

Truth is what has been established for centuries. All those who are looking for shortcuts should remember this. They are fighting against the weight of an established and thus not yet falsified concept.

One tool (or bullshit detector) from our toolbox may be to ask what the new concept XY that promises a shortcut does better than the established concept. If this superiority is not immediately clear but hides behind complex and complicated explanations, it is usually useless. If they hide it behind plain claims like “works better than sport,” then it is often a lie.

There are only levers

But why are some people healthier, more successful, or more prosperous than others? It usually has nothing to do with shortcuts, even if it sometimes seems that way.

If we ignore factors like luck (birth, genetics, etc.), then we are left with only one cause: leverage. We do not create shortcuts with leverage, but we potentiate the result of the try, fail, second/third … attempt, succeed process.

This applies to sport and work (net time invested) as well as to investing (capital invested) (note that this is also a heuristic). More difficult, however, is whether and to what extent we should use leverage.

Using the experience of others, i.e., relying on simple heuristics

Heuristics are great because we can work with them despite our limited knowledge and without logic and probability calculations. And a heuristic is all the more meaningful, the older it is without having been falsified. This indicates that it has already withstood many attacks.

The experience of other people who are exactly where we want to be is similar. Probably everyone who has been to the gym knows that one person whose arm size has never increased a millimeter but who instead wants to tell everyone what the latest and greatest sports hype is. Ignore!

Instead, I listen to people whose success is evident (not necessarily the work and deprivation behind it) and who can explain their success to me in simple terms (usually, the reasons are a lot of work and deprivation). Here we see a kind of Mandelbrot’s fractals. Heuristics (listening to the experiences of successful people) are based on heuristics (work, patience, deprivation, and time lead to success).

Risk/reward ratio: lever only goes in both directions

The more I learn, the more I exercise, the more I invest, the greater the outcome. So I can leverage the input to increase the output. But the problem is that the leverage that leads to a higher outcome can also act as negative leverage. In sport, the risk of a bad result is less inherent with high leverage than in finance. I may have overtraining and physical exhaustion, but investing in the wrong business with high leverage will still be more unpleasant.

Time is no lever, but it is still great

I am not sure if we can even consider time as a lever. After all, we can’t use time to shorten time. Instead, it works the other way around: we look for ways to use our time effectively, i.e., to reduce the time we need for a result. Time itself is not a lever. Instead, it is about leveraging time.

Nevertheless, time is an excellent tool in many ways. It helps us to show which of the new-fangled theories or methods are bullshit and what has been able to withstand all the attacks. Time smoothes out excitement. It also helps us reduce complexity because it peels away the fragile elements and leaves behind antifragility. And time teaches us to be patient.

Paradoxically, people strive for the exact opposite of time and duration for success. They try to spend as little time as possible and always look for shortcuts. That’s why athletes dope, that’s why young people fall for marketing scams, and that’s why people leverage on the stock markets. In doing so, they are fighting against another (German) heuristic: “Gut Ding will Weile haben” (Good things take time).

In this sense, take your time and have patience!