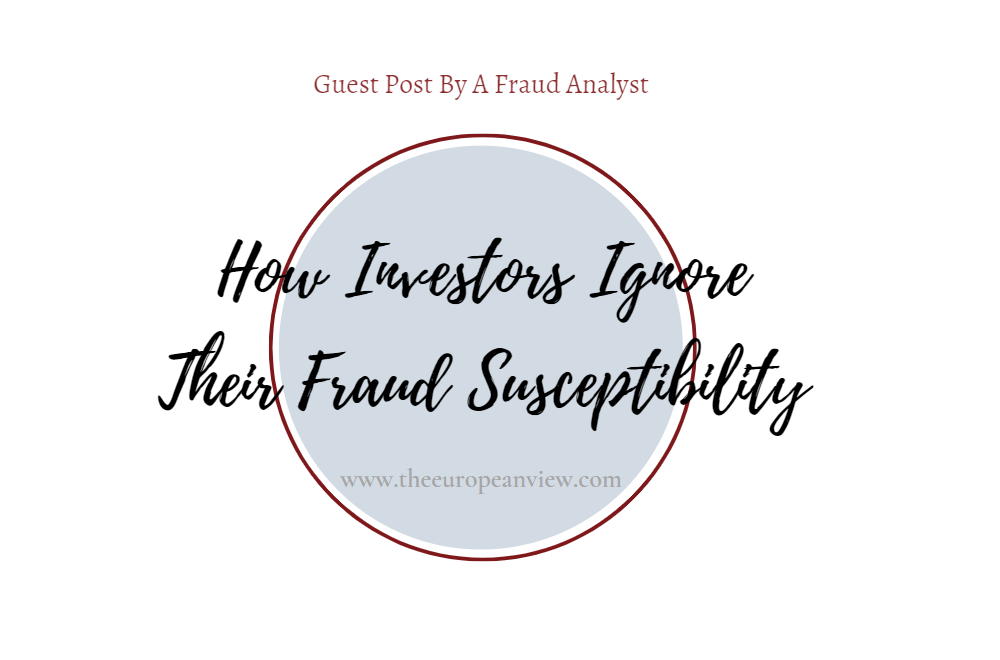 Men tend to overestimate their skills and consider themselves less vulnerable and susceptible to fraud. Women are rather risk-averse. Likewise, those who have the least seem to be the most afraid of losing what little they have. This article focuses on how investors’ perceptions of their own risk aversion and their susceptibility to fraud are related.

We know it with car drivers. People who drive a lot often overestimate their driving skills and their responsiveness.

We see a similar bias among investors. Hardly any investor would describe himself as a risky player. It is precisely this self-perception that could be the reason for the susceptibility to fraud. When it comes to driving, health is at stake. With fraud, it’s often money.

In both cases, knowledge of wrong thinking patterns is therefore essential to reduce exposure to risk

Risk aversion by age and gender

When we talk about risky financial behavior and ask people, “what do you think?”, they all claim to be investors with a proper degree of risk aversion. “Soldiers of fortune? Others, for sure, but me, never ever,” is the most common answer. And if we express this in numbers, we get: On a risk scale of 1-10, people over 65 have the highest risk aversion (3.72), while 40-49-year-olds have the lowest one (4.90). Similarly, we see that risk aversion is much higher among women than among men.

The good thing for women is that risk aversion seems to lower fraud susceptibility: according to the FINRA report, men are more likely than women to be solicited (87 percent), to engage (42 percent), and, eventually, to lose money (14 percent) in a potential fraud.

Risk aversion by salary and experience

We have seen above that the willingness to take risks is mainly below 5 on a scale of 0 to 10.  This indicates a certain degree of risk aversion within all the groups surveyed. No one seems to see themselves as a high-risk maverick.

At the same time, however, of all people, 56 percent of investment-experienced seniors say they have already lost up to 10,000 dollars through investment fraud at least once, 31 percent even more than ten thousand. How does this fit in with a supposedly reasonable risk aversion, which is just slightly below average even among those who earn six figures a year?

Where are all the high-risk players with a willingness to take risks of 6.0 and higher? Don’t they exist? ….

Well, there might be two solutions. Either that it doesn’t matter how experienced and risk-averse you are as soon as you lose control of yourself, or that all people overestimate their risk aversion. In the latter case, people consider themselves to be that one crucial percentage point better or more experienced or smarter than all of the rest of the crowd.

Ignorance of one’s own fraud susceptibility

Everyone is special, or at least wants to be, especially in terms of skill and experience. The members of the men group who are willing to take a higher risk and have a higher income are most likely to assume that they belong to the 1 percent. They already have a high income that they may attribute to special skills. But it is precisely this sense of certainty that makes them vulnerable.

Unfortunately, we live in a world where not everyone can be “special”. It may be that you or I belong to the single percent. But it may well be that we belong to the average or below-average group of the rest.

There’s a good chance that we are members of the average freaks and geeks team rather than the superhero team.  But do they? Well, we can’t know but you can ask yourself. How many of you are plus 40 and still have to work to make a living? And even if not, can we attribute it to special abilities, or was it all luck in the end?

When in doubt, I prefer to assume that I am one of the less gifted. Arrogance and ignorance of fraud vulnerability make investors the perfect victims. It blinds them to the methods and techniques that are mainly used to commit fraud. So overall, I’d rather think I’m naive and hedge against my naivety than think I’m invulnerable.

Personally, I have no idea about safe investments, but I know a thousand routes into abyss.

I’m not risk-averse. I’m security-savvy. I’ve sometimes put all my eggs in one basket – and lost. And later got it back somewhere else. Because I go all-in when my chances of total loss are low and not if my chances of winning are high. I don’t know the others’ cards. Nor do I know what the bulk of other investors are doing, but I pay attention to my own hand, watch the market, and don’t consider myself better than the rest of the average.

And that’s why there’s at least one thing I don’t fall for: I don’t get fooled too much. Just a bit below average.

If you’re risk-averse, you quickly lose your head in distress. You panic, think only of yourself – and become predictable for others.

Those who don’t do this, and always start to analyze their loss probability in retrospect, act like Captain Hindsight with his three sidekicks Coulda, Shoulda, and Woulda.

The Asian View is a European fraud fighter based in Eastern Asia with a focus on consumer fraud and fundamental investment scams.