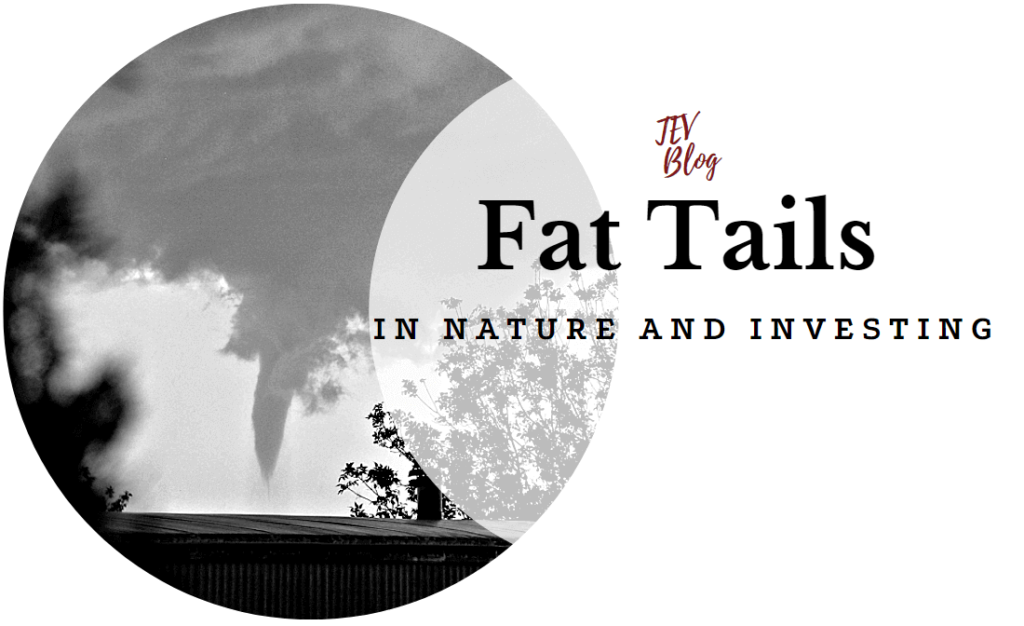 Parts of Germany are suffering from a historic flood triggered by heavy rainfall.  In an interview, the mayor of a city that experienced severe destruction tried to describe the extent of damage in words: “Five years ago, we had a flood of 3.60 meters. But this time, it was 8.87 meters. 8.87 meters!” This quote is of the highest value as it shows the relevance of fat tails in nature and their implications for our wealth management.

Contents show
1 We always look back and search for anchors
2 We don’t know the depth of the Atlantic
3 Fat tails
3.1 Mostly unpredictable
3.2 Not only unpredictable but also not rare
3.3 The destructive potential of fat tails
4 Fat tails and investing
4.1 Call and put options
4.2 Antifragility

We always look back and search for anchors

We humans like to look back. Firstly, we want to understand the past as completed time processes. Secondly, we try to deduce from past patterns what the future will bring.

In all the uncertainties surrounding us, past events offer support and protect us from walking around blindly. Once I’ve touched the hot stove plate, I know I’d better not do it a second time.

Trying to avoid or protect against natural disasters is similar to basic asset management thinking. Whether it’s the mayor in a city or me as an investor: We want to be prepared when the next disaster rolls over us.

For this purpose, we take a look at the past. We examine all the catastrophes, crashes, and experiences of doom and see if we can cope with a similar event today. We search for anchors (but may instead be stuck in filter bubbles).

We don’t know the depth of the Atlantic

If you want to anchor in the Atlantic, you should have as long an anchor rope as possible. But how long exactly should the rope be? I have no way of knowing and would also rely on past experience. I see the lake on my doorstep and maybe the Mediterranean or the North Sea.

If I even knew the deepest point of the Mediterranean, it would help me scale the depth of the Atlantic. At least it would give me some approximation.  But would I rely on it? Hardly. I would not base the success of my voyage across the Atlantic on the condition of being able to anchor there.

Fat tails are unpredictable by using existing theories as soon as events no longer follow a normal distribution. This is actually always the case in our complex financial world. But this also seems to be valid for natural disasters or pandemics.

Extreme events such as earthquakes, pandemics, and financial crises are not comparable with the biologically predetermined distribution of shoe sizes and body sizes. They are far too complex and little understood by us to make valid predictions about their occurrence.

Not only unpredictable but also not rare

Such fat tails are not only unpredictable but also less rare than we might think. We have seen several such fat tails in the stock markets over the last 20 years:

The probabilities of their occurrences were not explainable by the conventional methodology of a normal probability distribution. We also see the most violent natural disasters again and again, and it seems that the occurrence of such events is more frequent than the normal distribution would suggest.

The re-insurance company MunichRe registered 820 natural disasters causing insured losses in 2019 – three times as many as thirty years ago, while only a part of them was due to more people carrying insurance.

The destructive potential of fat tails

As if unpredictability and frequency weren’t bad enough, it’s also the risk of severe damages that should be of concern.  Because the main threat of these fat tails lies in their potential destructive power (remember: fat tails are the smallest number of observations while representing the bulk of statistical properties):

There is also another aspect: The damage often does not increase linearly with the severity of the event. It makes no difference whether you drop an egg from a height of 1 or 2 millimeters, even though the high has doubled. But between 5 or 10 cm, the moment will come when the egg will burst when hitting the surface.

It’s part of their nature that we cannot predict and thus avoid fat tails by using past patterns. So it doesn’t help to build a floodwall 4 meters because the worst high flood so far was only 3.8 meters high. There is no guarantee that the wall will protect the city during the next flood.

Hence, it is risky to invest with an expected return of 5 percent per year because there has never been a period where the annual return has averaged below that range.

Here we see that I cannot rely on past values as anchors. But that doesn’t mean that I avoid all risks from the very beginning. I keep it simple and try to reduce complexity. Hence, shenanigans like swing trading or market timing attempts have no relevance for my wealth management.

Besides that, I don’t make my life dependent on expectations. I don’t buy shares because I expect a specific return. I buy shares because I want to be the owner of a specific company. I look to see if the price is reasonable from my point of view, without linking it to an expected return. If one of these fat tails hits me, then so be it. My holdings won’t collapse, as I would still have the same number of shares as before.

The above considerations also reflect the main reasons why I don’t use put and call options. Here, an extreme event can destroy the return of 10 or 15 years in a single day. So it can go well 99 times, and I will still not know if it will be the case the next time or if I will irrevocably lose everything.

There may be a crash with stocks, but I will always remain the owner of the company (no matter how low the price falls). Of course, there is still the possibility that the government will expropriate me or that almost all my companies will go bankrupt in a crisis bigger than anything we’ve ever experienced.

However, we cannot rule out such scenarios anyway. Additionally, they would confront my life with completely different problems and probably make the question of a high return on investments irrelevant.

But even facing these scenarios, I am aware of these risks, and I would never say that their occurrence is impossible. Here I try to cover the risk as well. One insurance, for example, is my professional career, my acquired skills, and my associated independence.

In the end, fat tail protection is also about wanting antifragility and achieving robustness at the very least. The first step is the realization and acceptance of not knowing the future and not being able to tie one’s path-breaking decisions to the occurrence of certain events.

Secondly, I try to go through life as openly as possible and look for mental challenges everywhere.  Accordingly, falsification of one’s thinking is always the goal.

Thirdly, I try to provoke luck with an “all can, nothing has to” approach. It already helps to say yes more often than no in everyday life. Especially in cases of doubt, saying yes can open unexpected doors.