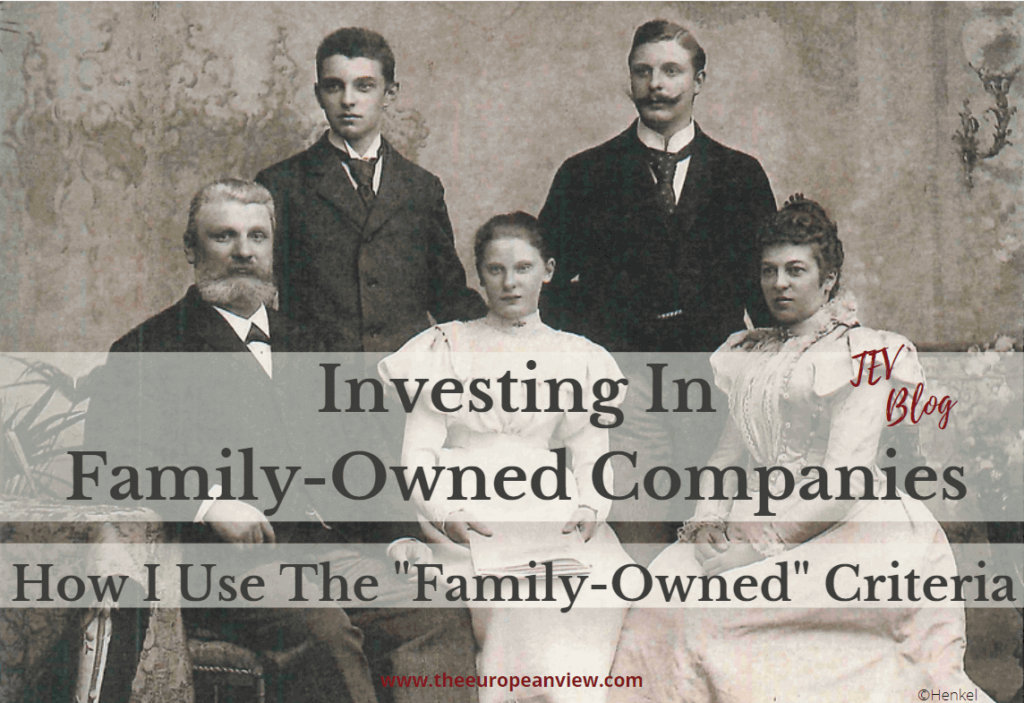 In this article, I want to talk a little bit about family-owned companies.  I believe they offer useful criteria for your due diligence. But as always, I would not make myself dependent on just one single parameter.

Contents show
1 There are countless ways to invest
2 Theoretical background
2.1 What is a family-owned company?
2.2 Why family-owned companies might be superior
2.3 Credit Suisse Family 1000 report
2.4 What are the empirical facts?
3 Do I also use the family-owned criteria?
3.1 Henkel
3.2 Mayr-Melnhof Karton AG
3.3 CTS Eventim
4 Conclusion

There are countless ways to invest

For investors, it is always in the foreground to increase their assets as quickly and as risk-free as possible. However, the fact that the risk correlates with the opportunities lies in the nature of investing. Nevertheless, many investors try specific methods or criteria according to which they select their type of investment strategy. Accordingly, some technical analysts try to predict the future development of the share price from past price movements using statistical probabilities. There are also value investors, trend followers, and many other different investment methods. Another example is the “Dog of the Dow” strategy.

Let’s dive a little bit into the world of family businesses.

What is a family-owned company?

First of all, it is difficult even to find a definition of when a company can be considered a family business or a “company controlled by a family”. There is no uniform definition. Nevertheless, it is essential that family entrepreneurs set the standard as anchor shareholders to exert a significant influence on the company and to be able to make strategic decisions.

It is, therefore, less a question of companies and founding families having some loose connections. Moreover, it must be crucial that members of the founding family are familiar with the operational business and can determine the strategic course of the company at any time, for example, by electing or removing a CEO. In a broad-based report published in 2018, Credit Suisse used the following definition, which I believe makes sense. According to the report, family companies are companies,

The theory is that family-run businesses are more successful in the long run than the average of all companies. According to this theory, the unique ownership structure ensures that such companies often think more long-term than other companies. They act more cautiously in the market and work more frequently with higher equity ratios and nevertheless often achieve higher profits than large corporations.

Such a structure makes it possible to make decisions quickly, which allows an efficient procedure. Above all, however, family businesses think in terms of generations and not at shorter intervals. In particular, individual quarterly developments are not relevant as long as the long-term orientation is right.

This long-term business approach makes it possible to advance and develop innovations in the long term. Such an approach also protects against taking too much risk too quickly. If a manager always thinks of success for future generations when making decisions, then it is not most important to produce new record results with every annual report but to successfully position the company for the long term.

Given that, the Credit Suisse found that family-owned companies seem to outperform non-family companies:

What are the empirical facts?

However, this is only a short period. Although the Credit Suisse report is very detailed and extremely worth reading, it is not necessarily universally valid. Similarly, shareholders are not in a position to invest in all family-owned companies. Many companies such as Koch Industries in the USA or the ALDI Group and Schwartz Group in Germany are not publicly listed. Besides, you would also have to buy all companies; otherwise, you run the risk of choosing the family-owned companies that perform poorly.

And there does not seem to be a uniform picture overall either. At least Joseph H. Astrachan (Kennesaw State University) and Thomas M. Zellweger (University of St.Gallen) came to this conclusion. In their article “Performance of Family Firms: A Literature Review and Guidance for Future Research“, published in 2008, they evaluated existing studies and research. They came to the following conclusion:

Do I also use the family-owned criteria?

As we have seen, it would be too easy to simply put family-owned companies in the portfolio and enjoy an above-average return. In the end, you have to do due diligence before any investment in individual stocks, whether or not the family controls the company.

Nevertheless, for me, it is generally a bonus when the founding family has a certain amount of power in the company. It makes me sleep even more calmly when I know that an entire family or even family dynasty depends on the good and bad of a company. Accordingly, I have also invested in several companies where I feel exactly this security.

The German company Henkel, for example, is a company in which the Henkel family holds more than 60 percent of the ordinary shares. Currently, the great-great-granddaughter is chairwoman of the Supervisory Board. The whole family, which is divided into several tribes, is closely connected.

Here I have the feeling that the well-being of the company for the whole family is the priority.  In addition to adhesives, the company mainly manufactures beauty and laundry care products and distributes them worldwide. The best-known brands are Schwarzkopf, Persil, and Perwoll.

Mayr-Melnhof is one of the largest producers of recycled carton board and a leading manufacturer of folding cartons. With a production volume of over 60 billion folding packages per year, Mayr-Melnhof occupies a leading position in the global packaging market.

The business is exceptionally conservative. At the same time, however, it is future-proof, as the demand for carton board is likely to continue in a globalized world. Like Henkel, Mayr-Melnhof is one of those companies where I buy shares from time to time when the share price has fallen a little.

CTS Eventim is another example in which I had shares for a long time (I sold them a few years ago). The current CEO and founder Klaus-Peter Schulenberg has led the company to market leadership in the areas of ticketing and live entertainment. As a European market leader in ticketing, CTS Eventim is active in 20 countries. In addition, CTS Eventim organizes many concerts, tours, and festivals for events such as ‘Rock am Ring’, ‘Rock im Park’, ‘Hurricane’, and ‘Southside’. All events have more than 70,000 visitors annually. The company also operates several of the most renowned venues in Europe. These include the LANXESS arena in Cologne, the Waldbühne in Berlin, and the Eventim Apollo in London.

Currently, both companies suffer from the consequences of the corona pandemic. However, recessions or crisis can provide a fundament for future wealth.  This may be the case with CTS Eventim as well. Anyone speculating on an imminent end to corona restrictions may even find a little value play at CTS Eventim because, after a long time, the company has once again achieved something like a halfway fair valuation.

There are good reasons to include in your due diligence the criterion of whether the company has a family background. Of course, this is not a generally valid indication of superior performance. However, it can be one good indication for some investors who are looking for excellent long-term value investment opportunities. I have some of the shares named above in my portfolio. However, I would not rely on this criterion alone. You should definitely carry out detailed due diligence before every investment.

[…] management. Thinking is less about quarters, but rather about years or even generations. I consider the company’s strong ties to the founding family and their will to maintain and increase success in the long term to be […]

LVMH stock - luxury for your portfolio?

[…] a good thing. However, as described in our previous Henkel analysis, there is a connection between family ownership and far-sighted management, where thinking is not in quarters but decades or […]

[…] Usually, CTS Eventim distributes 50 percent of its profits to shareholders. Since 2006, the company has paid a dividend and increased it from EUR 0.09 to EUR 0.62 in 2019, but the collapse in profits in the wake of the Corona Pandemic that year forced the company to suspend the dividend. None of the profit already generated in 2019 was therefore distributed to shareholders, which increases the probability that a dividend will be paid again soon in the event of a recovery. However, I consider a quick increase of the dividend to pre-crisis levels to be unlikely because the security measures and restrictions required for live events will probably extend well into 2021. Furthermore, I suspect that the founder and CEO, Klaus-Peter Schulenberg, would rather keep the money together in case of doubt than pay a dividend in uncertain times. Such responsible management would, in any case, be typical for owner-managed companies. […]