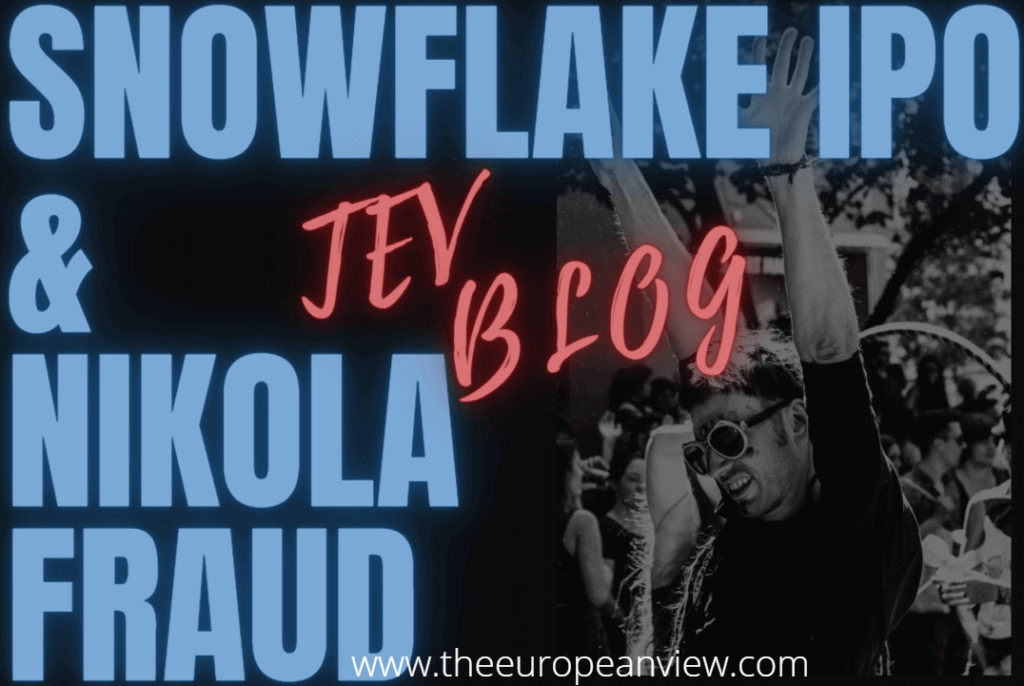 Investors who are somewhat active in the social media universe could not ignore the many reports about the Snowflake IPO and Nikola fraud. One reader even wrote to me and asked me what I thought of Snowflake’s IPO and whether I would buy some shares. I thought a little bit about this question. Instead of writing the reader a private message, I think it is a good idea to briefly share my opinion on the current situation with a TEV Blog post.

In case you have not noticed, I will briefly summarize the latest events.

The company has thus significantly exceeded its original targets and achieved the largest US IPO of the year. Around 2.4 billion dollars had been the target before the weekend. Among others, the big investors were the ones who were attracted. Marc Benioff, co-founder of Salesforce, and Warren Buffett each bought 250 million shares. Berkshire Hathaway also bought four million shares. Snowflake is active in the data warehousing business and offers a cloud platform by subscription to store, manage, and analyze vast amounts of data on the Internet. It is thus active in a significantly growing industry. The fact that Warren Buffett invested personally as a tech-skeptic is also remarkable.

Another exciter was the US car manufacturer Nikola Motors. Last week, a research company called “Hindenburg” attracted worldwide attention with piquant revelations. The research company called Nikola a fraud case. The reproach: Nikola’s technology is not yet as far developed as videos want to show: In several presentations of the truck Nikola One, Nikola showed a rolling vehicle. But the whole thing is probably a lie. Nikola himself now says that the drive was not installed. The company let the truck roll down a hill and chose the perspectives to make it look like driving. Now things are getting serious. The share price plummeted. The US Department of Justice (DOJ) has been making inquiries into claims leveled against Nikola.

It may surprise you, but I am not interested in these two stories at all. Neither the Snowflake IPO nor the Nikola fraud scandal have kept me very busy. Why should I let this affect me? I am not invested in Nikola. I take note of the development, wonder how someone could create such a video and live on. Likewise, I am not going to start reading all about Snowflake or buying shares myself. I might sit down in a quiet hour and take a closer look at the company. But there is no hurry. I don’t rush after investments. I don’t always have to sit in the front row.

If the train now runs without me like Tesla or Microsoft, that’s the way it is. I do not lose anything through this. If I were continuously annoyed about missed opportunities, I would be upset about not having guessed the last lotto numbers correctly (I don’t play lotto, but I would if I knew the right numbers in advance 😉 ). Investing is not a competition for me. I invest in companies because I want to own them, not because I believe their share price could double immediately (that would be great, but no one can know that beforehand).

I am like a farmer who has a lot of trees to stand in his garden. Besides, he has planted young trees, and he loves to watch them grow. He looks forward to the first harvest, he nurtures, and he cares for them. This farmer will not tear out one of his trees only because his neighbor suddenly finds a tree that might grow faster. That only makes sense if our farmer wants to sell his fruit. But he doesn’t want to. He wants to eat from them, and he may want to feed his family, share them with his friends, but sell them? Never, unless he has so much at some point that he no longer has any use for it.

Things you should consider

You can do what you want, and it may be that Snowflake will be the next Amazon or Tesla. It can make you rich. An investment of USD 5,000 or USD 10,000 could make you a millionaire in ten or twenty years. Nevertheless, there are a few things you should consider before you enthusiastically imagine a life in the Caribbean.

You should know your investment strategy. What is your goal? Are you a stock-picker, or do you prefer to invest in ETFs? Do you want to keep a stock for a long time, or do you trade? It would be best if you only deviated from this strategy in absolute emergencies or exceptions. Is such an exception given with the Snowflake IPO? If so, why with Snowflake and not with other IPOs?

Know what you are doing!

Besides, you should know what you are doing. Do you know Snowflake and do you fully understand the business model? Do you know what you get in return for your investment? What were the growth figures in recent years? What are the plans of the company, and what are the competitors? Microsoft and Amazon have similar services and products. Is Snowflake the better alternative?

Check your motives for investments!

It would help if you also question yourself critically about your motives. Why do you want to buy Snowflake? Is it because you want to become an owner or because you are afraid that other shareholders will take a lot of money and you will be left empty-handed? Be aware that greed and fear are strongly connected. As I said before, in the end, greed and fear are just two sides of the same page. Greed is often the fear of missing something that others may get. You may know the so-called FOMO (fear of missing out). In the Bitcoin hype, people acted like crazy and invested in Bitcoins because they saw how others got rich from it.

Emotions are a lousy advisor, and you should keep your distance from them. The same applies to impulsive buying. Many impulsive expenses are due to the reward system of the brain. People get high while shopping, and it might be similar to gambling in the stock market. It’s no joke! You should know the mechanisms in your brain and why you feel like this in some situations and like that in others.

In any case, I advise you to consider the above. Whether you buy or not is entirely up to you. No one can look into the future, and it may well be that the Snowflake IPO will become the next giant. However, I would keep my hands off Nikola after the fraud scandal. In Germany, there was also a horror story with the Wirecard scandal. A colossal air bubble misled public authorities, customers, and auditors. Terrible!

In the end, however, no matter what you decide – it is as always, I wish us only